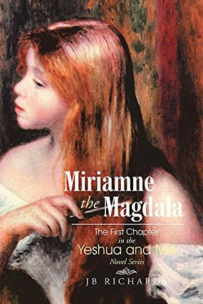 The ebook of Miri is only $3.99 at Amazon – excellent value for such a well-researched and well-written book.

.
A review of ‘Miriamne the Magdala’ is posted on this blog, if you’d like to read it.
.
You can also preview the second book by reading the first chapter of the second book, titled ‘Yeshua the Christ: The Silk Road’.
.
The second book in the Yeshua and Miri Novel Series is due in coming months. Narrated by the character of Yeshua Himself, it promises to be the most powerful, insightful, and revealing look into the mind and life of the Youth destined to become the Christ yet!
.

You can learn more about Jeannie and her amazing book series, and find links to buy ‘Miramne the Magdala’ on her website at  http://www.yeshuaandmirinovelseries.com/
.
.
.
Jeannie also runs a fabulous project called ‘Indies Helping Indies’ in which she reads and reviews books that may not yet be so well known to the public, yet which deserve some more attention and readership than they currently have.

You can find out more about this project at The Writer’s Block and read Jeannie’s fabulous book reviews there.

You can follow Jeannie on the following social media links:

Finally, you can read a really great interview with Jeannie by Benjamin Thomas on The Writing Train blog.