Holy moly. I started this book with absolutely no idea what was going to happen to me as I read it. Now that I have finished it, I find that I am completely and utterly in love with the characters and places that I encountered in this magical, mystical fantasy tale that has woven its tendrils around my heart.

It’s taking most of my will-power to write a 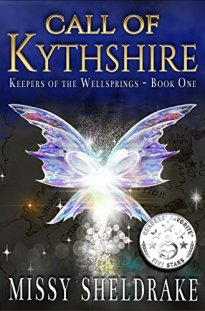 review before I pick up the second book. And that’s not the worst of it. I have work to do. And there are other things I have committed to read.  Drat you, Missy Sheldrake! Because of you, I am in the clutches of a bona-fide “I don’t want to adult,  I want to stay in the world of the book” dilemma. It’s a very good thing  for us both that there are sequels!

The first book in the “Keepers of the Wellspring” series, ‘Call of Kythshire’ is completely enchanting. It  has been on my TBR list for a while, looking completely innocent and unassuming while sitting on the shelf, but as soon as I opened it, my fate was sealed.

Missy Sheldrake began to work her magic on me from the first chapter, drawing me in until I was fully invested in the journey that my imagination and emotions were being taken on. It’s a beautifully crafted quest through faraway lands that become very real and much closer to our own world as one reads, accompanied by some of the most feisty and determined yet loveable characters I have ever met. I travelled with them, stood by them as they faced challenges from others who sought to misuse their powers, and encouraged them to conquer their differences and internal conflicts to overcome them. I’m not even sure I would have made all the same decisions, but then I remember Rian’s words: ” “Who are we to decide who’s worth saving and who’s worth punishing? What would you have done in such a desperate situation? Can you honestly say that you wouldn’t do everything in your power to help the ones you love?” and I know he is right.

Reader, beware. You will get hooked, and there will be absolutely nothing you can do about it. Except read the next in the series, that is.


Big News! As it turns out, and completely unknown to me until I had already written this review, book #4 comes out on Friday, March 3! On that day, the first three ebooks of this series will be ABSOLUTELY FREE on Amazon! It’s true!

There’s also a short story, ‘Snowberry Blossom’, that fits between books 2 and 3 of the tetralogy.

You can see for yourself on Missy Sheldrake’s own blog, which you should probably follow because you’re probably going to end up being a huge fan, just like me.

One thought on “Book Review: ‘Call of Kythshire’ – Missy Sheldrake”