Just the right proportions of history, secrets, adultery, passion, and rivalry are mixed together to form the wonderful sensation that is ‘An Enlightening Quiche’. 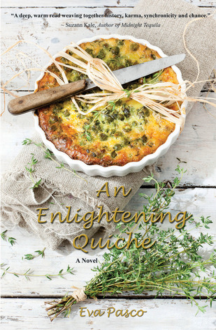 Just the right proportions of history, secrets, adultery, passion, and rivalry are mixed together to form the wonderful sensation that is ‘An Enlightening Quiche’.
Rich in detail and sassy narration, Eva Pasco paints a portrait of small-town life that rings true for anyone who has lived in such a place.
On the surface, everything is clean and just right, but underneath there is a surging, heaving mass of emotion, ambition and self-interest that immerses the reader in the
characters’ lives.
Eva Pasco‘s writing is descriptive and quirky, reflecting the French-Canadian idiom of the fictional town of Beauchemins, Rhode Island. The reader is drawn into the story through the parallel narrations of the lead characters, making them them feel as though they are a one of the townsfolk and leading them to decide for themselves who is honest or justified in their actions as the story progresses. Pasco’s humour comes through, resulting in chuckles and smirks as one reads. Yet there are also moments of shock and sadness, and of a strong sensation of more than one character wishing things had been different.
Having spent some time in the Eastern Townships of Quebec, the French-Canadian nostalgia for all things Quebequois has been beautifully captured by Pasco. The occasional exclamation of “Tabarnak!” and the consistent use of French names for even the most mundane of foods – “un croque-monsieur” for a grilled ham and cheese sandwich –  adds authenticity and depth to the characters. Beauchemins actually made me a little homesick for my own part of French Canada. Would someone please deliver me a poutine?
This honorary Canuck gives ‘An Enlightening Quiche’ 5 stars, not only for it’s fabulous story, but also for its charm and authenticity. Beauchemins – ca vaut le visite!

See the book and read the reviews on Amazon.

3 thoughts on “Book Review: ‘An Enlightening Quiche’ by Eva Pasco”