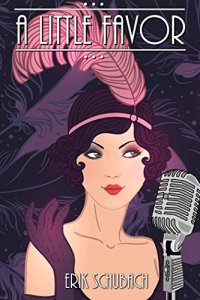 When Jillian agrees to do a little favour for a friend, things take a turn for the worst. Thus we see her drawn into a world that she never expected to be part of.
This is an enjoyable short story, easily read in less than an hour. Some of the 1930s slang – which would have been quite at home in an old black & white detective noir film – was a little mystifying, but the story was generally quite well told.
I liked the personal qualities that made Jillian stand out amongst pre-war stereotypes, and which she drew on in order to complete far greater errands than that initially entrusted to her.

As an enjoyable short read, ‘A Little Favor’ has been awarded a Silver Acorn.
Readers can buy a copy of the book at Amazon.