A collection of thoughtful and often intense poetry. 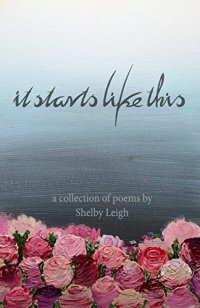 ‘It Starts Like This’ is a collection of thoughtful and often intense poetry that explores love, loss, anger, and the unrelenting ache of loneliness and of grief. It’s a collection which is highly relatable for anyone who has experienced the breakdown of a relationship or been let down by someone they trusted.

The poetry and expression are accessible and easily understood, and Leigh’s imagery is often quite stark and raw, but that is where her strengths as a poet lie.

That being said, this is a book that is probably even better when picked up occasionally and read over time, instead of in two longer sittings, as I found that some of the imagery and ideas were repeated from time to time, albeit in different ways and in varied expression.

Even among the poems that didn’t appeal as much to me personally, there are some incredibly powerful lines that forced me to stop and contemplate their truth and the magnificent way in which they were written. It should not be considered a criticism, though, that some poems appealed less than others: poetry is perhaps the most intensely personal and subjective form of writing, and what speaks strongly to one reader will merely whisper to another.

Leigh has penned some beautiful poems here, my favourites being ‘Scrapes’ and ‘Fears’.

‘It Starts Like This’ has been awarded a Silver Acorn.