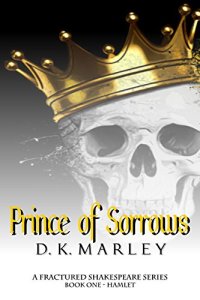 When one sets out to retell an old, world famous story, it is essential that both the plot and the characters are crafted well enough to keep the reader engaged when they already know what’s going to go wrong and how things are going to work out. This first first title in a ‘Fractured Shakespeare’ series by D.K. Marley does not disappoint in its new delivery of the ages-old story of Hamlet.

‘Prince of Sorrows’ is a novelised retelling of the story of Hamlet with a much less ‘Anglicised’ feeling about it than Shakespeare’s play. In fact, this story feels so authentic and well-developed, it actually seems as though it’s more like the original story from which Shakespeare might have drawn his plot and characters. The characters are complex and intricately drawn, and bear names that are definitely more Scandinavian than those used by Shakespeare, yet many are not entirely dissimilar. The story is just as dramatic as the play itself, capturing the intrigue of politics within the castle of Elsinore and the rollercoaster of Amleth’s thoughts and feelings as the tension increases and the story reaches its climax.

Even as a reader who knows Shakespeare’s ‘Hamlet’ extremely well, I enjoyed this adaptation of the play to prose. It’s a tragic story, very well told.

‘Prince of Sorrows’ has been awarded a Gold Acorn.
Find your copy here.